Shares
One Virginia mother and daughter will have a lot to celebrate this Mother's Day. 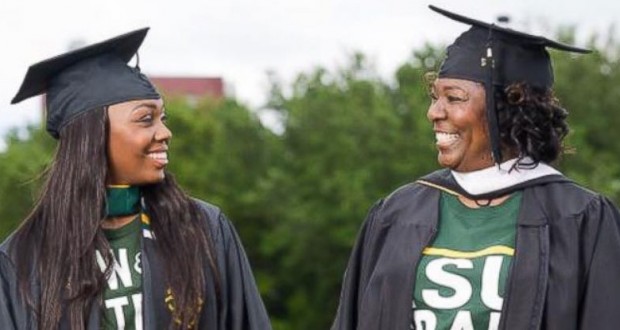 Karen Hunter and her youngest daughter Latrice will both graduate this month, obtaining bachelor’s degrees from colleges in Virginia, according to ABC News.

The moment is a long time coming for Karen Hunter, 53, who will be getting her degree in sociology from Norfolk State University today. The mother of two dropped out of school during her senior year more than 30 years ago after she had become a mom.

Karen Hunter only had 13 credits to go.

“I dropped out because I knew I had to take care of my daughter [Shonda Godfrey] and at the time I couldn’t do a lot of multitasking with working and going to school,” she told ABC News. “I was overwhelmed. I felt like I was a quitter because I had come that far.”

It also would’ve meant a lot to Karen Hunter’s mother, Harriet Godfrey, who wasn’t able to get an education growing up. In fact, the Danville, Virginia, grandmother cannot read or write. 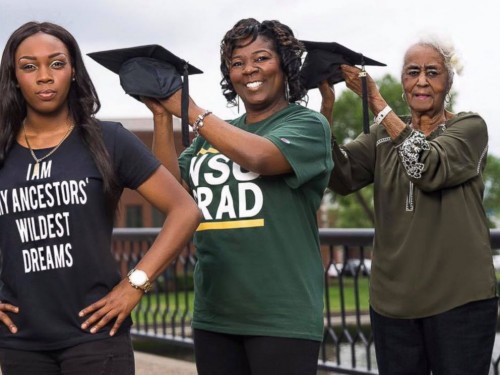 “But she made sure all of her kids went to school,” said Latrice Hunter, 22, who is scheduled to graduate from the College of William and Mary on a full basketball scholarship with a degree in kinesiology on May 13, seven days after her mother.

After she got married and went to work at Children’s Hospital of The King’s Daughters in Norfolk, Virginia, 20 years ago, and then gave birth to Latrice, Karen Hunter was still unsure if she should finish school. Still, her two daughters encouraged her.

“She always told me to push through and not to give up on stuff. That’s why I wanted to make sure I returned the favor by motivating her [to finish school,]” Latrice Hunter told ABC News.

Her older sister, Shonda Godfrey added, “I was a child when she was in college and that kind of motivated me to go to college.”

In fact, Shonda Godfrey, 37, is now studying to obtain a Ph.D. in public health from Walden University. She’s “very proud and ecstatic” that her mother finally finished her goal of getting a bachelor’s degree, she told ABC News.

Her younger sister agreed. “It means a lot,” Latrice Hunter said. “This is definitely something that I wont forget and I’ll always remember this time.”

For her own accomplishment, Karen Hunter said she’s “excited” to reach this milestone with her daughter.

And although she plans to continue to work at the Children’s Hospital, her daughter Latrice Hunter hopes to play basketball overseas after graduation.

“If that doesn’t work out, I want a career in physical therapy. I’m looking forward to that,” she added.