Shares
Like most students about to head to summer vacation, writer Mason Cross' young daughter was prompted to give her teacher feedback on an end-of-year survey. 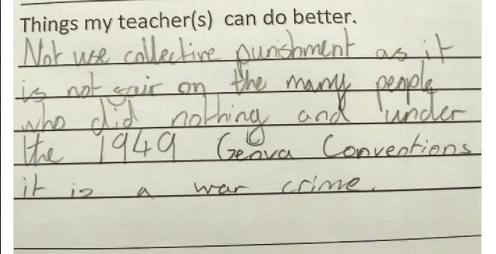 But unlike most students, Cross’ daughter pointed out that her teacher may be committing a war crime, according to Mashable.

My daughter actually submitted this feedback at school. Not sure if I should ground her or buy her ice cream… pic.twitter.com/4v8Gjb9riv

Cross’ dad described her as “11 going on 47,” but we’d probably be hard pressed to even find a 47-year-old who can casually cite and apply the Geneva Conventions, even with Google on their side.

In the tweet, the elder Cross asked, “Not sure if I should ground her or buy her ice cream,” and everyone is in agreement: get this girl some ice cream, and stat.

Some went so far as to say they’d crowd fund her ice cream endeavors (please don’t).

But her response showed that her teacher is definitely doing her job, at least. This girl’s got facts.