Shares
Could you ever imagine that cheetahs couldn’t roar like other big felines? Well, cheetahs meow just like our domestic cats as you can see in the video which became a new hit on the Internet 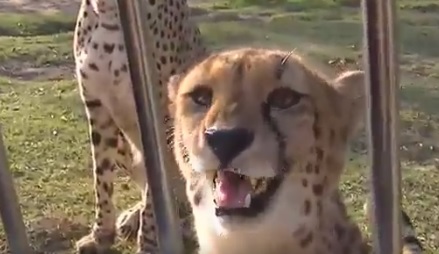 A video of the meowing predators published on Twitter has already scored more than 77 thousand likes and was retweeted 50 thousand times, Joinfo.com reports.

On the video, which, probably, was filmed during a safari, the cheetahs attracted by people sit near the car, meowing and purring at the camera.

“I didn’t know cheetahs meow I’ve always thought they roar my whole life has been a lie,” the author of the video wrote.

I didn’t know cheetahs meow I’ve always thought they roar my whole life has been a lie pic.twitter.com/Zbo8bDVTS6

The cheetah is unable to roar due to the presence of a sharp-edged vocal fold within the larynx, an organ in the neck of tetrapods involved in breathing, sound production, and protecting the trachea against food aspiration.

Some tweeters admitted that they did not even know that cheetahs can meow.

Anthony Stuart also wrote “wait until you hear them chirp!” with a link to another fascinating video:

“That’s their game. Lure you in for dinner with off the charts adorability,” Deb added.