Shares
The 15-year-old daughter of Cindy Crawford, Kaia Gerber has sparked a social media backlash after posing in a bathrobe for a selfie she shared on Instagram 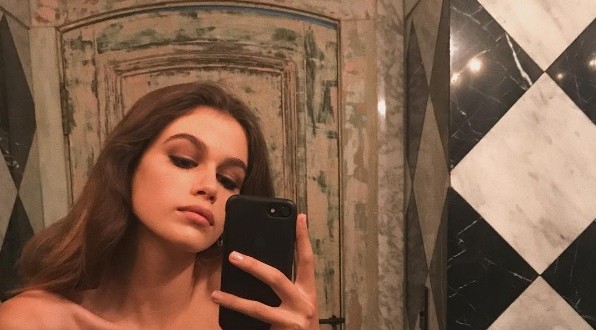 Kaia, who like her mother works as a model, posted on Instagram a bold mirror snapshot  in which she poses with a nearly bare torso in a bathrobe in a bathroom, Joinfo.com reports.

The photo, however, sparked a lot of criticism in the comments, many encouraging her to cover up and saying that the photo wasn’t “appropriate” for her age.

“You’re only 15 years! Get dressed!” wrote one of her followers.

And: “You are beautiful, but I think you’re really too young for it,” judged another one.

The photo was probably taken during a photo shoot, as the brunette has made many followers wonder if her parents Cindy and Rande Gerber approve the snapshot. “Surprised your parents are on board,” a follower wrote.

It is not the first time Kaia has been under fire. Five years ago there was a fuss about a photo of the then 10-year-old Crawford’s daughter. She then appeared in a mini-skirt by Versace for a campaign of the fashion brand.

Crawford then admitted that her daughter was indeed too young for such an image.

The 51-year-old Cindy Crawford and her husband Rande Gerber also have a son of 17.