Shares
A Canadian woman found her diamond ring lost 13 years ago wrapped around a carrot, plucked from the soil on the family farm 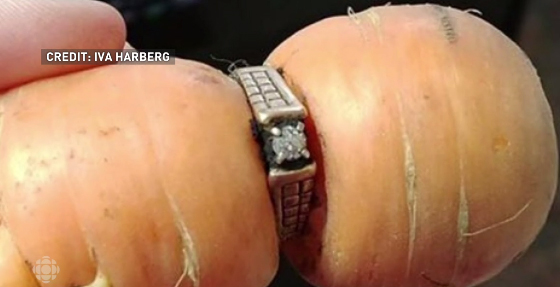 Mary Grams, 84, of Armena in Alberta, lost her engagement ring while weeding at her family farm in 2004. She thought it was gone for good. But it was found this week on a carrot, plucked from the soil on the family farm, according to CBC News.

Grams, 84, said she thinks she lost the ring while pulling a large weed from the garden in September 2004. Mary wore the ring since 1951, a year before she married her husband, Norman. After it was lost she quickly replaced it with a cheap one.

Grams now lives in Camrose. But the farm has been in the family for 105 years and they still maintain a garden there.

Her daughter-in-law, Colleen Daley, was the one who pulled the lucky carrot from the ground.

“I knew it had to belong to either grandma or my mother-in-law,” Daley said, “because no other women have lived on that farm. I’ve never seen anything like that. It was quite interesting.”

Grams’s husband died five years ago, a month after the couple’s 60th wedding anniversary. She’s looking forward to putting her original ring back on.

“I’m going to wear it because it still fits,” she said.