Home / Life / Temple emerged from the water in Mexico

Temple emerged from the water in Mexico 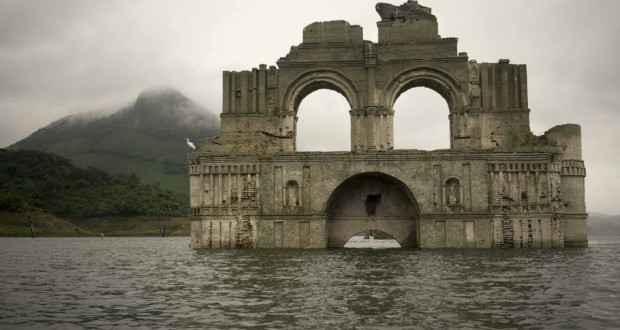 After a long term of drought this year in the state of Chiapas of southern Mexico, the water level of Grijalva river dropped by 25 meters (82 feet) and showed the ruins of a Temple of Santiago, also known as Temple of Quechula, Joinfo.ua reports with the reference to Mashable .

This mid-16th century church was flooded when the dam on the river was built in 1966. Since the water dropped, curious people have started coming to see the rare view. Local fisherman Leonel Mendoza ferries them to the ruins of the temple. Last time the church emerged from the water in 2002. Then water dropped so low that people could walk around the temple.

“The people celebrated. They came to eat, to hang out, to do business. I sold them fried fish. They did processions around the church,” Mendoza said.

The church in the Quechula was built by a group of monks headed by Friar Bartolome de la Casas, who arrived in the region inhabited by the Zoque people in the mid-16th century. The church is 61 meters (183 feet) long and 14 meters (42 feet) wide, with walls rising 10 meters (30 feet). The bell tower reaches 16 meters (48 feet) above the ground. It was abandoned due the big plagues of 1773-1776.