Home / None category / ATO latest news: the situation remained tense along the contact line on November 18

ATO latest news: the situation remained tense along the contact line on November 18

Shares
The situation remains tense in the ATO area along the contact line. The militants intensified shelling at the military positions, villages and checkpoints 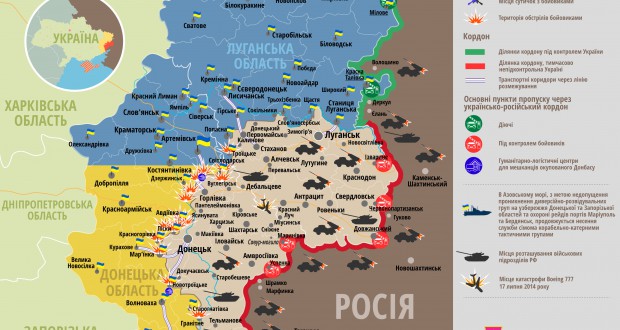 Twice they fired from grenade launchers and heavy machine guns on Artemivsk direction toward Lozova and Troitske.

In general, it was recorded 17 attacks, of which two – on Artemivsk direction and 15 – on Donetsk direction.

From 18 pm, the mercenaries opened fire for 30 times. Using infantry combat vehicle (BMP) arms, grenade launchers, heavy machine guns and small arms militants fired toward Avdyiyvka, Nevelske, Troitske and Krasnohorivka. And on Artemovsk direction, they fired from mortars, heavy machine guns and small arms toward Luhanske, Zaitseve and Mayorsk. Also, they fired from 82-mm mortars at Mayorsk, Troitske; used small arms to shoot at the villages of Hranitne and Shyrokyne.

Today, at the briefing, the Spokesman of the Presidential Administration of Ukraine on ATO issues Colonel Oleksandr Motuzyanyk said, that militants fired a machine gun, and a little later – launched 4 mines from 82-mm mortar.

On Donetsk direction, they renewed provocations near Svitlodarsk. Also, militants fired several times from small arms at the positions of the ATO forces near Lozova and Luhanske. A similar situation is on the outskirts of Horlivka – in Zaitseve, Mayorsk, Novgorodske, but the intensity of the enemy’s fire is somewhat higher. Near Mayorsk they also fired from mortar at Ukrainian positions.

In the area between Horlivka and Yasinuvata fired from the territory Krasnyi Partysan, not controlled by Ukraine, at the front positions of the ATO forces.

The most difficult situation was on the western outskirts of Donetsk. On the part of the front between Avdiyivka and Mar’inka the provocations continued for the whole day. The militants fired from small arms, rocket-propelled grenades. But they didn’t use the heavy weaponry.

On Mariupol direction, militants fired 11 mines at the facility near Novotroitske checkpoint on the road Mariupol – Donetsk. As a result, the border guards temporarily closed the passage for people and vehicles. According to the Chairman of the Donetsk regional military and civil administration Pavlo Zhebrivskyi, if the militants don’t stop attacking the checkpoint, the administration will be forced to close it.

Also, provocations were recorded near the villages of Hranitne and Shyrokyne. In both cases, the militants shot from small arms at the positions of ATO forces.