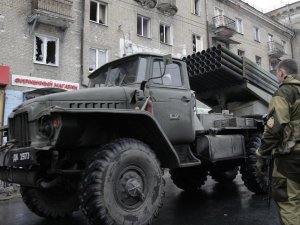 ATO press service reported that the militants increased the number of attacks on positions of the ATO forces. At night they used MLRS BM-21 Grad, shooting at Horlivka, Joinfo.ua repors.

Ukrainian side of Joint Center for Control and Co-ordination (JCCC) reports on many ceasefire violations from the militants in the ATO area.

In the evening on November 25, militants made another provocation, using MLRS BM-21 Grad, which had to be withdrawn in accordance with the Minsk agreements. From 20:04, they carried out launches from MLRS BM-21 Grad for 20 minutes from Spartak in the direction of Horlivka town. The militants launched more than 20 missiles. Both towns are under the control of militants.

The purpose of provocation is to discredit the Armed Forces of Ukraine. It also confirmed the reluctance of militants to implement the Minsk agreements.