Shares
The security situation in eastern Ukraine is worsening, with cease-fire violations at their highest level in months, the chief OSCE monitor stressed in the latest report 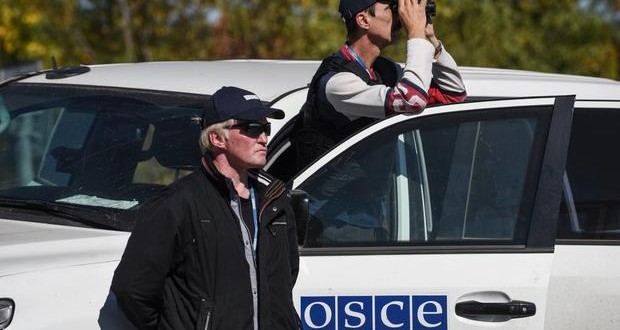 The statement by Ertugrul Apakan, head of the OSCE Special Monitoring Mission (SMM) to Ukraine, came as four civilians were reported killed in shelling in eastern Ukraine, Radio Liberty reports.

At least four civilians were killed April 26 when three cars were fired upon close to a rebel checkpoint near the edge of the rebel-held town of Olenivka in the eastern Ukrainian region of Donetsk, the OSCE said in a separate statement, without assigning blame.

“During the past weeks, the OSCE has registered the highest number of cease-fire violations in months,” Apakan said in a briefing of the Permanent Council of the OSCE in Vienna. “Armed violence in eastern Ukraine has once again reached worrying levels.”

The Organization for Security and Cooperation in Europe (OSCE), a pan-European rights and security body, independently monitors the conflict.

Apakan warned that artillery and mortars banned under the Minsk agreements “are being used again in increased numbers.”

“A sustainable cease-fire is of central importance to the further implementation of the Minsk agreements,” Apakan told the council. “Now is the time for the sides to show visible and decisive action to restore it.”

Apakan, speaking to journalists after the briefing in Vienna, also raised concern about “direct attacks” against SMM monitors, which he said were taking place “with impunity for the perpetrators.”

“Three serious security incidents have taken place recently: Weapons were shot in the direction of SMM monitors, they were threatened at gunpoint, and one SMM vehicle was hit by a bullet,” he said.

“This impunity for people who threaten, violently mistreat or attack the SMM, or who violate its freedom of movement, must end,” he said.

Apakan also said monitors “continued to experience restrictions in reaching the Ukraine-Russian Federation border in areas not controlled by the [Ukrainian] government.”

Separately, at a security conference in Moscow on April 28, OSCE Secretary-General Lamberto Zannier spoke out against the idea of giving weapons to monitors.

Zannier said arming the OSCE monitors should only be done if there is consensus and clear agreements are in place, and if their tasks are clearly understood.