Home / None category / Tornadoes, storms rip through US Midwest, killing at least two

Tornadoes, storms rip through US Midwest, killing at least two 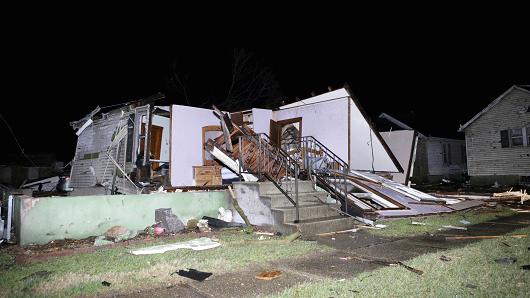 A tornado struck near Ottawa, a town of about 19,000 people, 50 miles (80 km) southwest of Chicago, killing at least one person, meteorologist Amy Seeley said by telephone. She had no further details, according to CNBC.

Another person was killed near Perryville, a Missouri community of 8,000 people about 80 miles (130 km) south of St. Louis, where storms flipped over cars along an interstate and took down trees and power lines, media reported.

“Tough and tragic news tonight out of Perryville where there are confirmed reports of a tornado touching down,” Missouri Governor Eric Greitens said in a statement on Facebook.

“Freaking out over tornado sirens in my basement with a 7 month old and three dogs,” Kristie Foote in Jasper, Indiana, said on Twitter. “I guess we will be having a slumber party down here.” More than 14,000 customers were without power in the region, according to information on electric company websites.

The La Salle News Tribune reported power outages and heavy damage to a nursing home and other buildings. There were minor injuries in the nearby village of Naplate, a fire official told the newspaper.

A deadly #tornado tossed cars like matchbox toys onto I-55 last night in Perryville, MO. This is what’s left after a dozen + were cleared. pic.twitter.com/Jhl227wIfd

Seeley said the storm front weakened as it moved east into Indiana after pounding the Ottawa area with baseball-sized hail and high winds.

The February tornado was a rarity in Illinois, she said, although several January tornadoes had struck the area in 2008.

“It is unusual but it has happened before,” Seeley added.