Shares
A 94-year-old World War ll veteran received the birthday gift of a lifetime in the form of a lottery scratch-off. 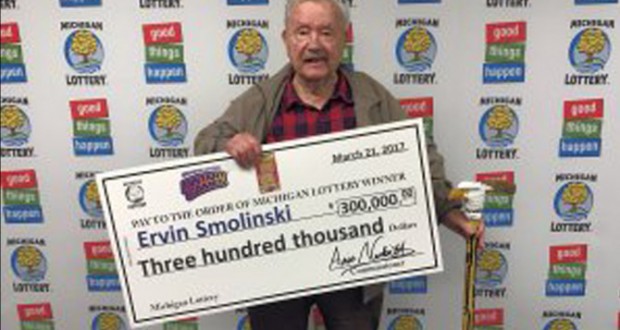 Ervin Smolinski, of Michigan, who turned 94 on March 17, was stunned when he realized he’d received a Double Bonus Cashword ticket worth $300,000 as a gift, Joinfo.com reports with reference to Inside Edition.

His daughter-in-law bought him the winning ticket at a local CVS Pharmacy as part of a tradition that he started. Smolinski always purchases lottery tickets for family members’ birthdays and now they return the gesture on his.

“Every month, I buy some instant tickets and send them as gifts to family members who have birthdays that month,” said Smolinski. “It’s turned in to a bit of a tradition, and now everyone sends me scratch-offs and chocolate for my birthday.”

Smolinski says he remained calm about the win.

“I had four Double Bonus Cashword tickets and the big winner was the first one I scratched,” he said. “I’ve seen a lot in my time, and I don’t get worked up too easily. I think my son-in-law was more worked up than I was.”

After he won, Smolinski kept checking to make sure he had the ticket with him and that what he was reading was real.

“I wanted to keep the ticket safe, so I kept it in my pocket,” said Smolinski. “I got a little nervous about that, because a lot of time I’ll toss the paper I accumulate in my pocket into my wood burner. Luckily that didn’t happen with my ticket.”

Smolinski visited Lottery headquarters Tuesday to claim his big prize. With his winnings, he plans to invest, buy a new shed, and buy a newer used car.

“I’m pretty frugal,” he said. “I always shop sales and take care of my money and that won’t change. The only thing that will change is I won’t have as much stress in my life worrying about money.”