Shares
"I'm glad none of you were yanked off your plane," Jimmy Kimmel told his audience in his monologue Monday. 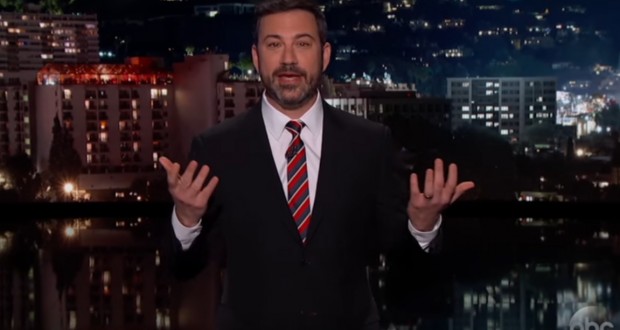 According to USA Today, Jimmy Kimmel then briefed them on the incident in which a passenger on an overbooked United Airlines flight was dragged down the aisle of a plane to accommodate the company’s employees. Kimmel also showed them the video.

The late night host also mentioned the tweeted statement from the airline’s CEO, Oscar Munoz, which he also found discouraging.

“‘This is an upsetting event to all of us here at United. I apologize for having to re-accommodate these customers,'” Kimmel said, reading the comment.

“That is such sanitized, say nothing, take no responsibility, corporate BS speak,” he continued. “I don’t know how the guy who sent that tweet didn’t vomit when he typed it out, but it’s crazy.”

Kimmel surmised if something like this happened at an Applebee’s, customers would never return but acknowledged travelers have fewer options when it comes to flying.

“The next time we book a flight, it doesn’t matter if it’s United or Delta or American,” Kimmel stated, “if one of those flights is a dollar less than the other one, that’s the one we’ll pick. They know this. That’s why we’re stuck with them. Our only other choice is the bus, so…”

“United didn’t even admit they did anything wrong, and in fact, if anything they seem to be doubling down on this,” Kimmel added as an introduction to a parody advertisement for the airline.

“We’re United Airlines. You do what we say when we say, and there won’t be a problem,” a “flight attendant” stated in the spoof. “If we say you fly, you fly. If not, tough (expletive). Give us a problem, and we’ll drag your (expletive) off the plane. And if you do this, we’ll beat you so badly you’ll be using your own face as a flotation device. United Airlines: (expletive) you.”