Microchips implanted into human body will replace keys and passport

Shares
Modern technology is not standing still and gradually penetrates into our life. Today, chips "sewn" into the body is considered as universal means of communication solving life"s problems. 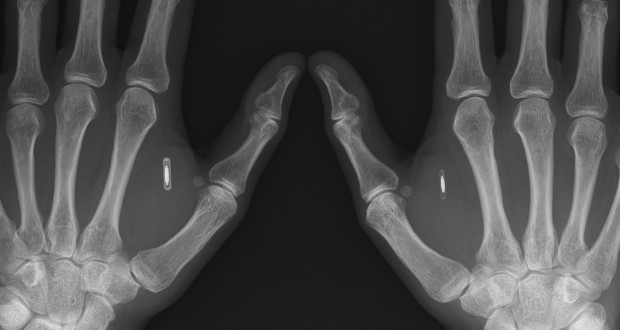 Implantation technology shows great potential, but it is in the early stages yet and in the future it may be useful in everyday life.

Wireless technologies are constantly evolving. Wi-Fi has changed the principle of connecting to the Internet. And now there is Near Field Communication (NFC) technology, which may be the next step in the evolution and will change our daily lives. NFC technology is simple: it is wireless, low-power communication tool that works within a short range and can transfer data between two devices.

NFC chips in cell phones, for example, can replace a wallet, car keys, train tickets and much more.

The potential of this technology has been recognized by Apple, including its new billing system.

The development of this technology can go much further. Some NFC chips can be implanted into the human body. Thus, there are already people living with NFC chips in their hands. The chip is used to open a house door, to ignite a motorcycle, or to store sensitive data. It is likely that in the future these chips will contain identifying information.

According to experts, chips implantation is our future since it is very convenient.

For example, a 25-year-old resident of Sweden Emilott Lantz from Umea believes that carrying the keys is very uncomfortable. In order to rid herself of this burden the Swede resorted to the modern method of solving this problem, by "sewing" a special rice grain size chip in her hand.

The woman is an employee of Codemill consulting company and in her opinion, those who do not like her decision have limited imagination. "I do not feel as though this is the future – this is the present. To me, it"s weird that we have not seen this sooner," she tells The Local.