Shares
A strange phenomenon in the form of five-pointed star was recorded in the early morning December 15. 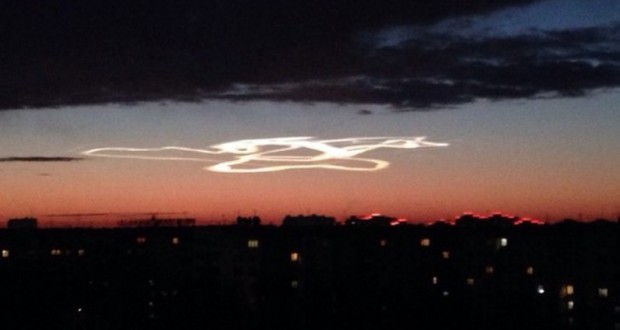 This morning, residents of Barnaul, Altai Krai, Russia could see in the sky a mysterious trace of an unknown space object. Social network users publish photos of five-pointed star among the clouds. This celestial spectacle could be seen till the dawn.

"It was most likely a bolide, the cosmic body that invaded the Earth's atmosphere. Indeed, on the night from December 13 to December 14, we were able to observe the Geminids meteor shower," the local planetarium says.

According to other sources, in Barnaul sky there could appear the traces of the Proton-M rocket launch which started in the morning on December 15 at 6:16 am local time from the Baikonur Cosmodrome.

It is reported that the first stage of the carrier rocket detached in Kazakhstan, the second one – just over the Altai Mountains, and the third one – over the Pacific Ocean.

"Most likely, this is the traces of the stages, as the route of celestial phenomena's appearance coincides with the route of the falling stages: Barnaul, Biysk, Gorno-Altaysk," local publications write with reference to Natalia Pavlova, the employee of the Barnaul planetarium.

It is to be recalled December 2 Karelian people reported that they had seen a meteorite falling into the lake.