Home / Tech / Cicret bracelet to make your hand a tablet

Cicret bracelet to make your hand a tablet

Shares
There is presented a draft of the new wearable device that will turn your hand into a smartphone touchscreen. 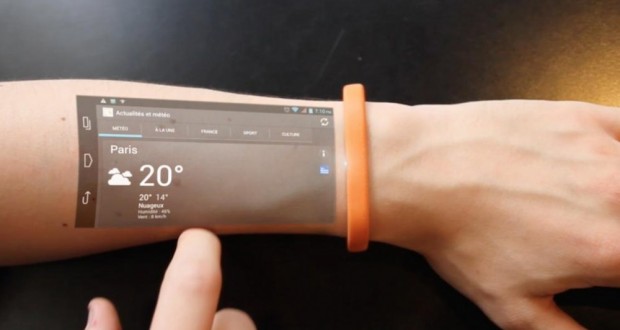 Over the past few years, the number of portable gadgets has increased dramatically. During this year a lot of inventors from all over the world have presented their versions of "smart" watches, fitness trackers, smart glasses and other devices with the prefix "smart."

On their background the idea of innovative Cicret bracelet definitely will not be lost. The developers of the device were able to come up with something truly extraordinary: a gadget that can project the picture from smartphone screen into the hand of its owner turning it into a kind of touchscreen.

The authors of the bracelet believe that such a device is quite feasible using the pico-projector and several proximity sensors. At this stage, the developers from Paris are already working on creating Cicret. In order to start mass production of such devices, the official website of the bracelet has held crowdfunding campaign. By the time of writing this article, the French have already collected 14% of the required sum. The idea of the Cicret bracelet is simple: with the help of mini projector built into the device, the image from the smartphone screen is projected on the user's hand. Several proximity sensors allow you to track different finger gestures, transforming them into commands for a mobile device.

The creators of the gadget note that this technology will allow the bracelet holder to read messages, play games, answer calls, check the weather and use maps.

If the authors of the idea manage to collect the necessary sum with the help of crowdfunding, in the near future there will appear such miracle bracelets. The retail price of Cicret will be approximately 475 dollars.

It is reported that in addition to the projector and proximity sensors, the device will contain accelerometer, micro-USB connector, CPU, Bluetooth, Wi-Fi and 16 or 32 GB internal memory. It is assumed that the bracelet will be available in 10 colors and serve as a standalone mobile device thanks to SIM-card support.