Shares
ESA module "Philae" was able to collect data that is changing the structure of comets. 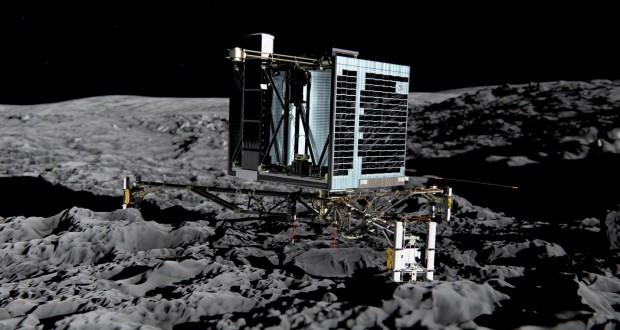 Scientists have released the data from ESA's Philae module on the surface of the Churyumov-Gerasimenko comet allowing to revise the theory of the comet structure.

This information was provided by Natalia Bezaeva, the expert of the Extra Terra Consortium scientific laboratory of the Ural Federal University.

Now in San Francisco she attends the meeting of the American Geophysical Union, where the new data from the surface of the comet were released.

"Magnetometer showed that the comet surface is completely nonmagnetic. Magnetic saturation of this celestial body is much smaller than that of the meteorite, moon dust, or terrestrial rocks. Its surface is covered with frozen dust, the depth of which reaches tens of centimeters. Because of it, most likely, and Philae could not reliably "dock" to the comet and bounce off it twice," explained Bezaeva.

According to her, so far, the scientists do not have the data on cometary dust. However, it is clear that the density of the upper layers of the comet is 400 kg per cubic meter, which is substantially less than the density of water.

"Surprisingly, the comet's surface is not solid, but consists of blocks. For example, at one point the value of the block is from 26 cm to 4 m. And the comet's surface is similar to the March snow mixed with mud, which is a bit frozen and crystallized. This "hard snow" covers the entire surface of the comet," Bezaeva told.

She also added that the temperature on the comet surface is from -135 to -155o C and at this temperature life is impossible.

According to her, the European Space Agency experts still do not want to disclose all data collected by the Philae module from the comet's surface. But even these data give rise to essentially correct the theory of the comet structure.