Statue of Liberty guarded by UFO

Shares
The video published by a New Yorker shows a spaceship-like object flying over the symbol of the United States. 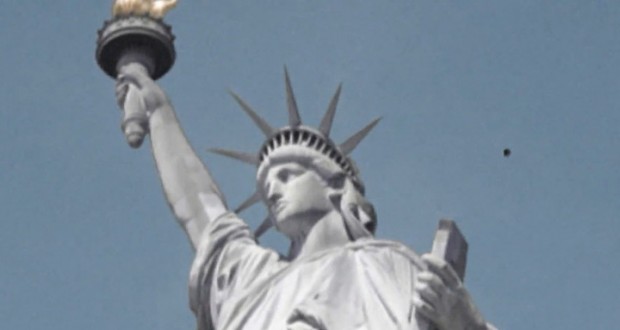 Recently on the Internet there appeared a video with an UFO hovering in the form of a flying ball over the Statue of Liberty in New York.

The record was posted by Scott Kensington. According to him, his wife filmed it. And the object on the video is nothing but a ship of aliens.

"My wife said at first she thought it was a balloon but it stopped all of a sudden and stayed in one place for a while. She also ran out of disc space hence why the footage suddenly stopped," Kensington said. The New Yorker believes that the object has an extraterrestrial origin.

The other day in Chile, local residents discovered a fleet of UFOs. The video posted on the Internet shows a group of luminous objects flying over the city.

Earlier it was reported that the residents of Columbia have recorded a UFO on camera. The video posted on the Internet shows a "flying saucer" unnaturally moving in the sky above the forest.

From the distance, it is not clear what kind of object is in the sky. However, when reviewing in detail it becomes clear that this is a UFO similar to the "classic" flying saucer of the aliens.