Shares
The picture of a young couple taking a photo of themselves was made in the English town of Rugby in 1926. 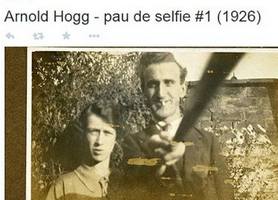 A few days ago on Twitter there was posted a picture that can be considered the world's first selfie. In this photo a young couple is taking a photo of themselves. Moreover, they were using a device similar to a tripod for selfie. This picture was taken in the English town of Rugby in 1926.

5-centimeter photo has been stored in the family album of the couple for a long time and their grandson Alan Cleaver published it on Twitter. He noted that this photo has always been the most popular one among his family members. According to the author of the post, this picture perfectly conveys the character of his grandfather, who is best remembered as very funny and creative person.

Also the last month there was made the biggest selfie. The photo taken with 5-megapixel camera of Lumia 730 phone is attended by 1,151 people. The image was taken in Bangladesh. The participants were asked to sign up to determine how many people came to the event.