Shares
Steve Bennett, a jeweler and founder of the Gemporia brand, created unusual engagement rings. He equipped his jewelry with GPS system. 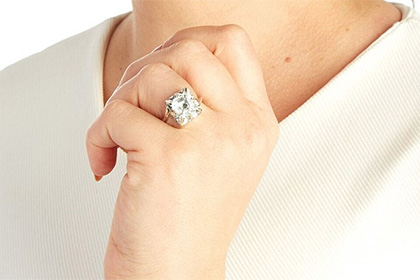 It was reported by Joinfo.ua with reference to Daily Mail. The jewellery received unequivocal name of "fidelity engagement ring."

The designer suggests that the main purpose of the built-in tiny chips would be a protection against theft or loss of the valuable thing. Nevertheless, the author of "fidelity rings" admitted that his new product would be of interest to jealous spouses, who want to keep track of their second halves.

Rings with the tracking system are available in two versions. "The first one is a chunky square-cut diamond with a lavish eight-prong setting, and the second one is composed of a violet marquise diamond," the news agency informs.

The price of the jewelry is not specified.

The designer says that in the future he plans to expand his range of products equipped with the tracking system. In particular, Bennett plans to develop a line of children's jewelry that would help parents to be aware of the place of location of their kids.

Steve explained: "We're trying to prevent precious objects getting lost or harmed and what could people possibly be keener to protect than their children?"

Earlier, it was reported that the scientists at the Swiss Federal Institute of Technology developed tescopic contact lenses.