Shares
The magic jacket has built-in inflatable pillow, a hood in the shape of a mask for sleep and gloves to warm hands. 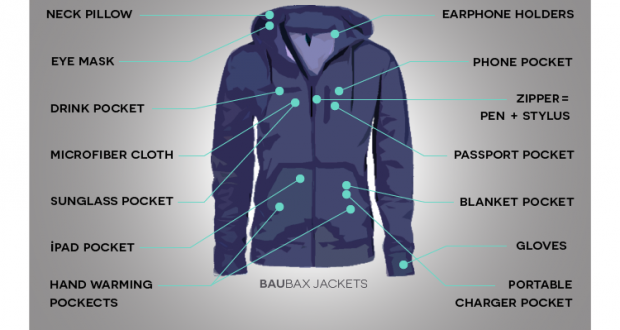 A project of the American startup BauBax presenting Travel Jacket with 15 built-in functions, has collected over $ 1 million in just 3 days at Kickstarter.com.

Travel Jacket has special pockets and additional features designed to make travelling more comfortable. The jacket has pockets designed for iPads, smart phones, documents, glasses, and even unfinished cans of soda or beer. In addition, it has a built-in inflatable pillow and a special hood, serving as a mask for sleep, gloves for hand warming, slider zipper, which is easily converted into a pen, and more. Travel Jacket will be available in the versions as hoodies, blazers, parkas and bombers both for men and for women.

With all the built-in functions the jacket will cost $ 315. Backers will be able to get Travel Jacket in November 2015. The end of the fundraising campaign on Kickstarter is scheduled for September 3, 2015.