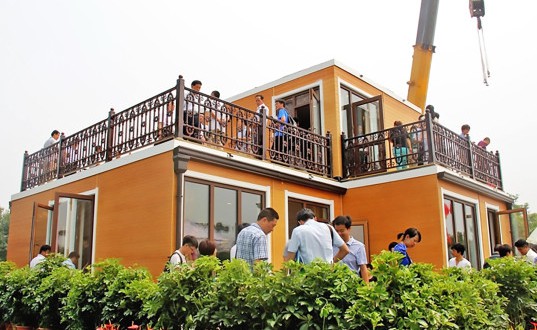 The Chinese company ZhuoDa ‘built’ the two-story villa in Xian, China, in less than three hours using 3D printer. The 3D printed house consists of separate modules, which then were assembled just like LOGO bricks, Joinfo.com reports refering to the Inhabitat news agency.

Before delivering modular pieces to the place, approximately 90 percent of the construction was completed in an off-site factory.

This efficient and timesaving process dramatically reduces construction costs to just 2,500 – 3,000 yuan ($400 – $480) per square meter. According to An Yongliang, the developing engineer at Zhuoda, the 3D-printed villa only takes about 10 days to produce from initial construction to final assembly, while it typically takes half a year to build a traditional villa, the article says. The material the house is built of is kept secret. It is only known that it consists of industrial and agricultural wastes.