China builds biggest telescope with a size of 30 football fields

Shares
In the mountains of southwest China is being built a telescope with a size of 30 football fields. 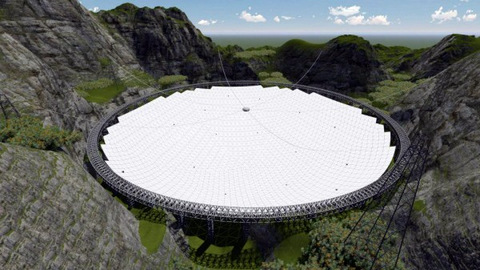 In the mountains of southwest China is being built the biggest telescope in the world with a size of 30 football fields, Visti Pro informs.
The perimeter of the telescope is 1.6 kilometers. It will take at least 40 minutes to walk around it.

The leviathan is being built in the mountains in the Guizhou province in southwestern China. Chinese engineers have already started to assemble the FAST telescope.

“Engineers have begun to assemble a telescope reflector with a diameter of 500 meters consisting of 4450 panels. Each panel is an equilateral triangle, each side of which is 11 meters,”  the Synhuaa agency informs.

On the area designated for construction there are three hills located 500 meters away from one another. In addition, within a radius of five kilometers from the telescope there is no city. According to scientists, this is a perfect place for the telescope. Construction is supposed to be completed next year. According to the chief engineer of the telescope, Sun Caihong, FAST is not just the largest in size, but also extremely sensitive.

“Panels can change their positions through connected wires and parallel robots. We can control their position with an accuracy of 1 mm,” said Zheng Yuanpeng, chief engineer of the telescope’s panel project, told Xinhua.