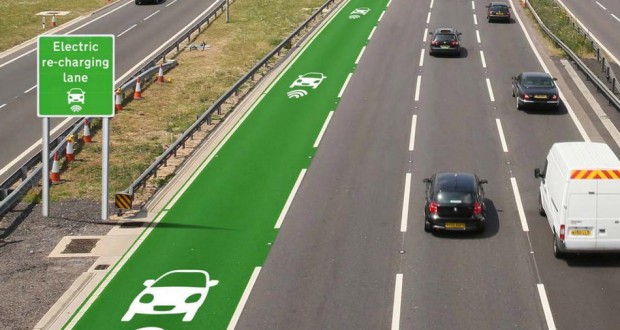 The UK has come up with an interesting idea to boost the usage of electric cars. On the roads, there will appear a lane, that will re-charge the car while it is driving along it, Joinfo.com reports with reference to Mashable.

Highways England announced last week that it is embarking on an 18-month scheme to trial charging lanes after completing an early feasibility study. During the trials, vehicles will be fitted with wireless technology and special equipment will be installed beneath roads to replicate motorway conditions. Electric cables buried under the surface will generate electromagnetic fields, which will be picked up by a coil inside the device and converted into electricity.

The trial is set to take place later this year; full details will be revealed once a contractor has been appointed. There will be a potential followup on real roads.

Transport minister Andrew Jones says that “the government is already committing £500 million over the next five years to keep Britain at the forefront of this technology.”

“Vehicle technologies are advancing at an ever increasing pace and we’re committed to supporting the growth of ultra-low emissions vehicles on England’s motorways and major A roads,” Mike Wilson, Highways England’s chief highways engineer, said.

The off-road trials of wireless power technology will help to create a more sustainable road network for England and open up new opportunities for businesses that transport goods across the country.”

This isn’t the first trial of its kind. In South Korea, a 7.5-mile (12 km) stretch of road charges up electric buses as they drive along, via a process called Shaped Magnetic Field in Resonance (SMFIR).

In England, a trial in Milton Keynes saw buses charged wirelessly through plates in the road, but they had to stop moving to receive the juice.

But this new scheme is a lot more ambitious and potentially game-changing. Some skeptics have spoken out against the scheme; Dr Paul Nieuwenhuis, the director of Cardiff Business School’s Electric Vehicle Centre of Excellence, told the BBC that “it sounds very ambitious to me. Cost will be the biggest issue and I’m not totally convinced it’s worth it.”

Earlier, we reported about a bit defferent road problem. In Canada, there was found an interesting solution to restrain crazy drivers.