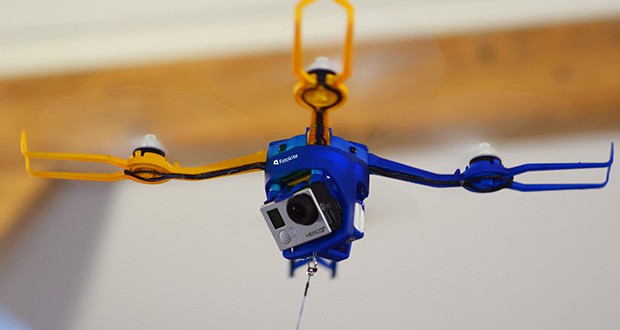 A new concept of selfie drone proposed by a Swiss entrepreneur claims to be the safest of its kind, geek.com reports. There are a lot of restrictions on drones according to the FAA Regulations which you should follow but the Fotokite design negates most of them.

There is wide range of camera drones and It’s not the first ever tethered drone. One of the issues with tethering the copters is the potential for the fishing line or wire to get tangled in the blades. The engineering in the Fotokite relies on the tether to help it maintain its distance close to the pilot, utilizing tension from the cord between the drone and the handheld controller to stay near by.

They’ve developed an ingenious leash reel that moves the Fotokite within the palm of your hand. Turn left, and it moves with you, pull it down, and it will saunter on. It operates exactly like a kite would. Which is probably where they got their catchy name.

The drone weighs just over half a pound, sans the GoPro camera. The downside is that it gets a maximum of fifteen minutes of air time before the battery dies out. That’s pretty standard air time, and enough to capture some pretty spectacular footage without the hassle of becoming an expert drone videographer.

It’s a pretty smart design for those looking to get into aerial photography and video work on the cheap. Even the packaging is pretty nifty – the whole unit folds up to fit in a cylinder carrying case. The designers are only on the fundraising phase, but as there’s a lot of people who want to get on that drone selfie market, they have every chance.