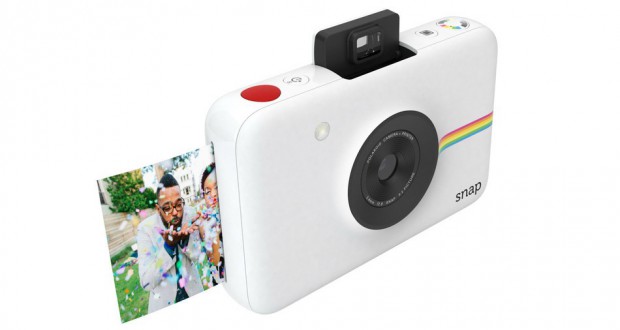 The trick is in the Zero Ink printing technology developed by a company called ZINK. Instead of using ink, the camera uses special printing paper which contains cyan, yellow and magenta dye crystals under a protective polymer coating. The ZINK-enabled printer inside the Polaroid Snap camera then activates those crystals to create a full-color photo.

The photos are of wallet size — 2 inches x 3 inches — which is a bit smallish but big enough for a quick, printed memory.

And while the no-ink thing sounds handy, it leaves the question of the price of ZINK papers (which, with their adhesive backs, also function as stickers). You can get a 50 pack of 2×3-inch ZINK paper for $24.99 at Amazon.

Also the photo can be printed in a larger size later, as Polaroid Snap takes 10-megapixel photos and has a microSD slot holding memory cards with up to 32GB of capacity. The camera has several simple presets — color, black and white and vintage — a selfie timer, and a photo booth mode, which takes six photos in 10 seconds.

Polaroid Snap will be available in four colors — black, white, red and blue — in the fourth quarter of 2015 for $99.