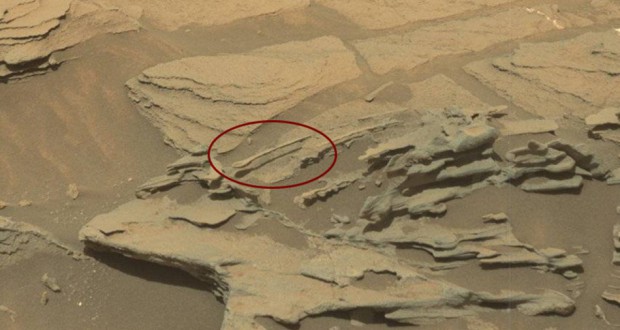 The Curiosity Mars rover took another picture of Mars with a spoon-shaped rock ‘flying’ over Mars, Joing.com reports with reference to Mashable.

Of course, it isn’t actually a kitchen utensil placed carefully on a rock by some mischievous Martian. The spoon-shaped structure is likely a ventifact, “a rock shaped by wind,” according to NASA.

Mars is a somewhat dead looking world now, but scientists think the red planet was once warm and wet like our own. Earlier in its mission, Curiosity discovered that its part of Mars — the Gale Crater — could have once supported microbial life. The rover — which is about the size of a car — is now making its way up the base of a Mount Rainier-sized mountain called Mount Sharp. It is taking photos and gathering more data along the way.

The spoon-shaped ventifact is part of a group of rocky outcroppings snapped by the rover on August 30.

Naturally, a lot of things on Mars look like down-to-earth objects if you look hard and widely enough.

It should be recalled that recently, the web site of NASA published a photo showing a girl walking on Mars. Experts do not hurry to make any conclusions, so at the moment they are examining images taken by the Curiosity rover.