Shares
A group of creative Japanese students from the University of Tokyo presented a robotic arm (already the third version), that overcomes a human in the popular game of Rock-paper-scissors. 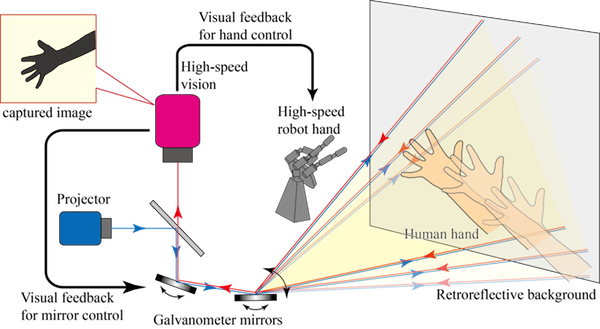 A group of creative Japanese students from the University of Tokyo presented a robotic arm (already the third version), that overcomes a human in the popular game of Rock-paper-scissors, Joinfo.com reports with reference to UA Party.

The system consists of two modules: the first one tracks the shape and position of the hand in real time and sends a signal to the second one, which is a robotic arm with the control unit. The latest model has an optical module, which is dynamically centered directly on the user’s palm with a minimum of delay. Given the movement of the fingers it almost instantly determines which figure a person is going to show with the hand –  ‘stone’, ‘scissors’ or ‘paper’.

Due to high speed of bringing of the robotic arm into action and the work of the module detection, the whole system allows to prepare a “winning” option by the time a person completes the movement of the fingers. The user may not even stop the arm at some point in space showing the combination.

To achieve the desired effect, the developers have combined modules from the two systems. 1ms Auto Pan-Tilt is designed to track a variety of physical objects during sports events, and Lumipen 2, which ‘looks’ at the position of the hand, was originally designed to create dynamic projections on moving objects.

While developing all three versions, the students had the goal to meet the 60-millisecond interval, during which a person creates the position of the hand, and not to allow the user to change their decision at the last minute at the expence of rapidity of action.