Shares
Tesla presented the third car - Model X - the first electric SUV with seven seats and 400 km range without recharging. This car can even save you from biohazard 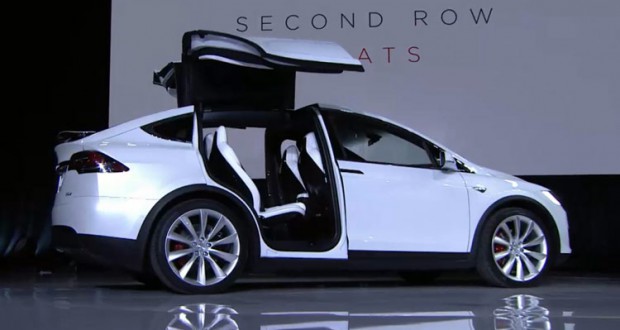 Tesla presented Model X at the event at its Fremont, California factory on Tuesday night. The long expected electric SUV model has many impressive specs and features, CarScoops reports.

First of all, Model X has seven seats in three rows. It can transport the passengers, along with their luggage in the front and rear boots, and still hit 96km/h in just 3.2 seconds. For the time being this car can take you for about 400 km without recharging. As to the most fascinating characteristics: Tesla CEO, Elon Musk, presented some innovative features of Model X, starting with its impressive ‘Falcon doors’ that allow easy access to second and third row seats from any parking space. It allows you to avoid ducking and saves the passengers some bumps while going in and out of the car. The driver’s door has a really cool feature, which Musk called an “invisible chauffeur.” When the driver comes to the car, it reads his movements and opens in time with the driver’s approach. Once the front passengers are seated in the Model X, the front doors automatically close.

Tesla Model X has also has air-conditioning system with HEPA filters. Even more, this system has a ‘Bio-weapon Defense mode, which can save you from bacteria and viruses during some apocalyptic scenario.

Another good news from Musk is that he expects the Model X to get 5-star NHTSA crash safety ratings in all segments, including rollover avoidance, which would be a first in the SUV and minivan categories.

If you are ready to buy this SUV, reservations online are available, but ‘the estimated delivery for new reservations is the latter half of 2016’.