Canadian inventor created a real ‘Back to the future’ hoverboard

Shares
Canadian inventor Catalin Alexandru Duru tests the second version of the Omni Hoverboard. Now we just have to wait till 2017 to see 'Back to the Future' hoverboard flying on the streets 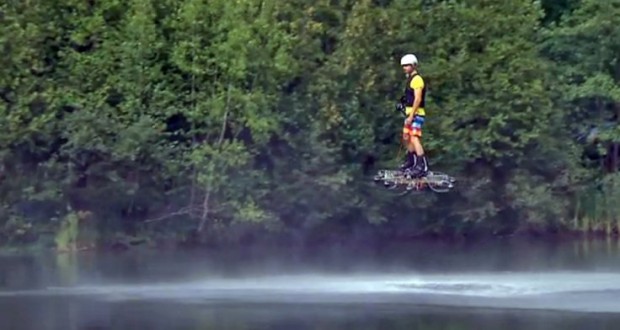 Canadian inventor Catalin Alexandru Duru invented his hoverboard, flying just like in ‘Back to the Future’ sequel, and made the record for the longest hoverboard flight in the world. On his homemade propeller-powered creation, Duru flew 905-feet on a distance of 16-feet above the lake, remaining in the air for 1.5 minutes, Joinfo.ua reports with the reference to Electronic Products.

The Omni Hoverboard has eight propellers and made from carbon fiber. The motors responsible for controlling the propellers are powered by 12 lithium polymer batteries, which generate 40 horsepower.

Now with his company, Omni Hoverboards, Duru is working on a secret next-generation version of the device.

The video below, by CBC News, a division of the Canadian Broadcasting Corporation, shows the hoverboard in action.

Acceleration is achieved by gripping a joystick made from a pair of pliers, which allow the hoverboard to fly higher or lower, and speed it up or slow it down. Snowboard binding straps securely anchor the user to the hoverboard, and the board is steered when the user physically turns in the air to change its direction.

Now the future is coming, because the Omni Hoverboard is expected to be released in 2017.