Yamaha unveils autonomous Motobot that might surpass human in the future 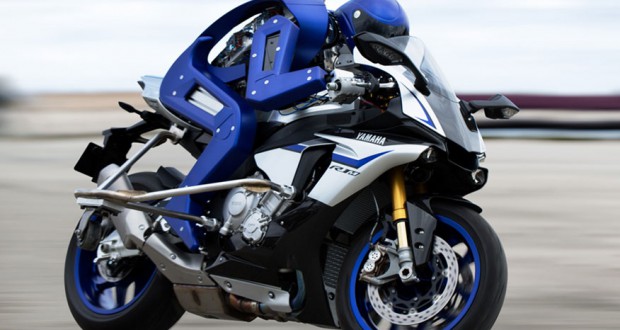 The robot has been designed by Yamaha to go around a racetrack at really high speeds, Joinfo.ua reports with the reference to international media.

“I am Motobot. I was created to surpass you”, – says robot. The quote sounds even creepier when you hear it from the robotic motorcycle rider, which speaks with a bad Italian accent.

Yamaha has refused to immerse in the details of the project, but says it is completely autonomous.

‘This is an autonomous motorcycle-riding humanoid robot built around a fusion of Yamaha’s motorcycle and robotics technology.

Yamaha made a declaration that he autonomous humanoid machine will be developed in near future to be able to drive cars.

The video released to introduce Motobot to an unsuspecting world shows it riding Yamaha’s top sport bike, the 1000cc YZF-R1M, around an empty lot. It takes turns and hits at least 60 mph as its metallic hands and feet operate the throttle, brakes, clutch and gearshift just like a person would.

Motobot isn’t ready to take on the champ just yet. It says it’s not even sure it could beat a five-year-old Rossi, but is improving its skills every day. Don’t believe it at your own peril.

And while there aren’t a lot of practical applications for a robot that can ride a motorcycle, Yamaha is using it as a test bed for technologies that can be integrated into the bikes themselves, making them easier and safer to ride.

Whether or not that includes a camera that looks over your shoulder for fast-approaching robots has yet to be revealed.