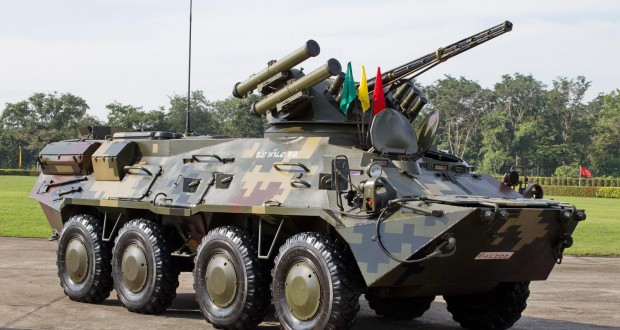 At the international exhibition Defense & Security 2015 in Bangkok, Ukrainian delegation signed a contract on the production of Armored Personnel Carriers in Thailand, Joinfo.ua reports with reference to the press service of the National Security and Defense Council (NSDC) of Ukraine.

During exhibition Ukrainian delegation held a meeting with with Vice-Prime Minister – Minister of Defense of Thailand Prawit Wongsuwon and the senior military leadership of the country took place. The negotiations concerned the extension of military cooperation between two states.

Currently, in accordance with the two signed agreements, Ukraine exports to Thailand APCs, tanks and supporting and auxiliary machinery.

“The establishment of this production will bring not only additional financial benefits for Ukraine, but also will allow upgrading of the existing production capacity and modernization of military equipment for our own needs. In addition, it will be an excellent opportunity to strengthen Ukraine’s position in the Asian region,” – said Oleg Gladkovskyi to reporters.

This year the products of 37 official delegations from all around the world and 400 defense companies from 50 different countries are presented at the exhibition.

It should be recalled that earlier Ukroboronprom presented evacuation helicopter ‘Lev-1’ for security forces. ‘Lev-1’ was designed on the basic of helicopter Bell-47, has an engine GTD-350, the same as in the MI-2V, and works on the single-rotor scheme with the tail rotor. The machine has a unique possibility to fly at low altitude, that the low level of noise and a small area of ​​the lateral projection eliminates the probability of detection and destruction by the enemy.