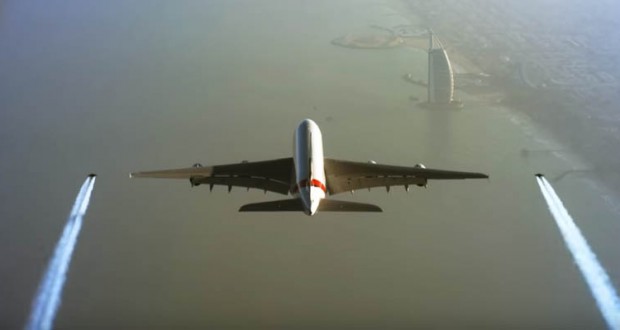 Jetman Dubai team and the Emirates A380 recently took to the skies of Dubai for an exceptional formation flight over the Palm Jumeirah and Dubai skyline with Burj Khalifa in the background, Joinfo.ua reports with the reference to emirates247.com.

The unprecedented formation was conducted after painstaking planning and meticulous collaboration with an intense focus on safety of everyone involved.

The carefully choreographed aerial formation involved the world’s largest passenger aircraft flying at 4000 feet in a two holding patterns. The A380 aircraft was then joined by the Jetmen Dubai duo, experienced pilots and operators of the smallest jet propelled wing, who were deployed from a helicopter that hovered above the aircraft at 5,500 feet. The Jetman Dubai duo launched from a helicopter well above the A380’s flying altitude and all activity was protected within a Temporary Restricted Area controlled by Dubai ATC. The duo conducted formations on both sides of the aircraft and joined to one side thereafter before breaking away.

During the formation flight, the Emirates A380 flew at a weight of just 350 tonnes (the maximum weight of an A380 is 575 tonnes). As the largest passenger aircraft in the world, wake turbulence was the most significant risk to Jetman during the flight.

Adel Al Redha, Executive Vice President and Chief Operations Officer for Emirates said: “This display between man and machine celebrates the magic and beauty of flight, a feat which just over a hundred years ago would have seemed an impossible dream. It also showcases how far human vision and ambition has, and can continue to push aviation’s boundaries.”

Yves Rossy from Jetman Dubai said: “I come from a background of piloting commercial aircraft and it was always a dream to fly without the constraints of being inside a cockpit. Vince and I are thrilled to partner with Emirates and would like to thank them for helping us turn yet another dream into reality. It was absolutely surreal flying alongside the biggest aircraft there is and we felt like mosquitos beside a gigantic eagle.”