Shares
Impacto solved the issue of physical feedback - one of the crucial issues in creating the virtual reality: how to make the device to detect your movements and let you interact with objects in the virtual world with your own hands 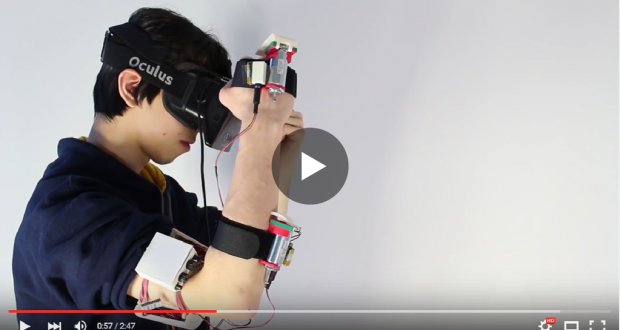 Impacto solved the issue of physical feedback – one of the crucial issues in creating of the virtual reality: how to make the device to detect your movements and let you interact with objects in the virtual world with your own hands.

Facebook, for example, is working on creating a virtual reality, and claims to build a teleporter by 2015. As the chief technical officer announced that “Facebook wants to build a device that allows you to be anywhere you want, with anyone, regardless of geographic boundaries.”  They develop this project based on Oculus Rift virtual reality headset, which comes out early next year.

Impacto is a research project, working on the simulating of physical impacts using tactile and electrical muscle simulation. As the researchers say, the objective of their work “is to unify the virtual world of the computer with the physical world of the user into a single space”, Joinfo.ua reports with the reference to Geek.

The key idea, that allows the small and light impacto device to simulate a strong hit, is that it decomposes the stimulus: it renders the tactile aspect of being hit by tapping the skin using a solenoid; it adds impulse to the hit by thrusting the user’s arm backwards using electrical muscle stimulation. The device is self-contained, wireless, and small enough for wearable use, and thus leaves the user unencumbered and able to walk around freely in a virtual environment.

Impacto is being carried out by Pedro Lopes, Alexandra Ion, and Patrick Baudisch at the Hasso Plattner Institute in Germany. It works by combining a skin tap with electrical muscle simulation contained in a small wireless device attached to the body. When a virtual hit occurs, the device reacts by physically tapping the skin and enhancing the hit response by stimulating the user’s muscles and forcing the limb back, just as if it had been struck. All this is achieved in just 50 ms.

The tactile response can be varied by fitting a number of different-shaped tips to the device. The type of feedback the user receives is especially suited to sports, with the Impacto having been tested for boxing, soccer, and baseball so far.

While it may seem like quite a limited system, remember this is just a research project and a work in progress, yet they’ve already created a wireless system that can give physical feedback and hooked it into the Unity game engine. Imagine miniaturizing such a device, attaching a number of them to different parts of the body, and you’re well on your way to a virtual reality force feedback suit.