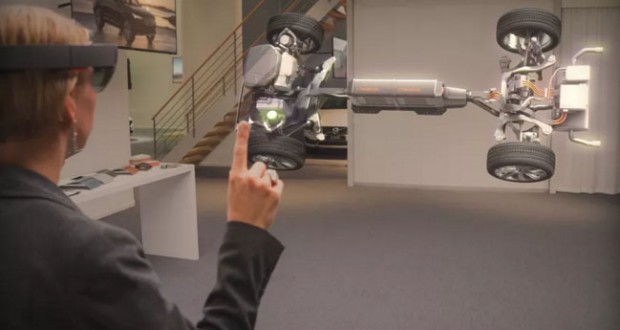 Microsoft and Volvo have been working on a way to incorporate what they call “mixed reality” into the process of choosing a car for about six months, says Volvo global marketing vice president Thomas Andersson. The result is a virtual showroom. Located at Microsoft’s headquarters in Redmond, it’s a series of podiums and a fenced, raised platform clearly meant to support some shiny automotive prototype, Joinfo.ua reports with the reference to the Verge.

The catch, of course, is that they’re all empty. Instead, a car dealer and a potential buyer, are wearing HoloLens headsets on, both of them seeing and interacting with the same holographic cars. The main stage holds a life-size projection of Volvo’s unreleased S90 sedan, which buyers can see with different rims and paint jobs by using Microsoft’s “air tap” gesture. Another demo strips away the outside of the car to reveal its engine and undercarriage, and another projects a short animation showing off some of the car’s more unusual features, like a system that uses data from other cars to alert drivers about ice patches.

“People aren’t reading car manuals or user manuals much anymore, and there’s so much they miss,” Volvo senior marketing VP Björn Annwall tells me. The demos are a “human, interactive,” and undeniably novel replacement. A miniature holographic S90, for example, shows off its many sensors by lighting them up as viewers move around its sides and back.

Microsoft has taken a lot of criticism for HoloLens’ constricted field of view, but it’s a problem that seems theoretically solvable. So, Volvo hopes “to put this in front of customers in 2016.”

It should be recalled, that Impacto, a research project, solved the issue of physical feedback – one of the crucial issues in creating the virtual reality: how to make the device to detect your movements and let you interact with objects in the virtual world with your own hands.