Shares
ThyssenKrupp invented the world's first elevator that travels up, down, and sideways without cables. Just like a real-life Willy Wonka elevator 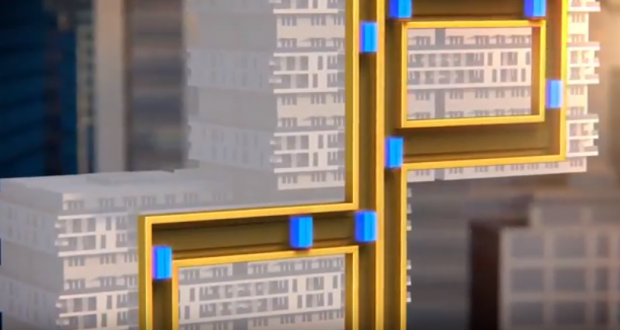 During 160 years elevators were built based on the same rules: one cabin in one shaft that travels up and down.

Now ThyssenKrupp decided to ignore these boundaries and developed the world’s first elevator that travels up, down, and sideways — all without cables. Just like a real-life Willy Wonka elevator.

“It’s an obvious waste of building space, to use such high shafts for only one cabin,” Schierenbeck says. “It’s like operating one train between two cities on one track, instead of multiple trains on flexible tracks.”

Earlier this month, the German company unveiled the first test model at its Innovation Center in Gijón, Spain. It features four elevators in two 10-meter shafts. Schierenbeck says the final model, set to be completed by December 2016, will be three times as large.

Called the MULTI, the elevators propel themselves by maglev, or magnets that levitate and move by repulsion. Instead of cables, each elevator will have one motor that kickstarts the maglev.

The MULTI will feature a complex system of shafts with multiple elevators that move vertically and horizontally. The elevators will rotate in a loop motion and travel at just 11 mph, Schierenbeck says.

For comparison, the elevator in New York City’s Empire State Building travels at around 22 mph. The CTF Financial Centre skyscraper in Guangzhou, China—due to be completed in 2016—will have the fastest elevator in the world at around 45 mph.

While the MULTI is slow, users won’t have to wait more than 30 seconds for an elevator to arrive, Schierenbeck says.

The MULTI elevator shafts are 25% smaller than normal elevators, which creates more room for a building’s floor space to be used for other things, like offices and apartments. Since multiple elevators can loop simultaneously in the same shaft system, the MULTI can transport 50% more people in the same time as an average elevator.