Home / Tech / Historic moment: a rocket landed safely back on Earth after flying to space

Historic moment: a rocket landed safely back on Earth after flying to space 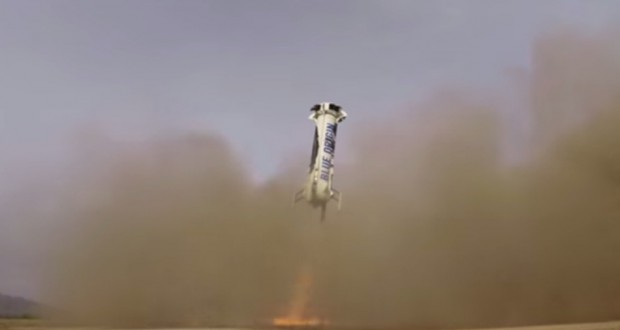 As new video shows, the private spaceflight company launched its New Shepard rocket to the edge of space and then landed it back, Joinfo.ua reports with the reference to Mashable.

“Rockets have always been expendable. Not anymore,” Bezos wrote in a blog post announcing the rocket test Tuesday. “Now safely tucked away at our launch site in West Texas is the rarest of beasts, a used rocket.”

Blue Origin tested the space system earlier this year, but the company wasn’t able to land the rocket back on the ground due to hydraulics issues.

“Full reuse is a game changer, and we can’t wait to fuel up and fly again,” Bezos added.

For the test, the New Shepard rocket brought the space system’s capsule about 100.5 kilometers into the air, reaching a max speed of Mach 3.72.

The capsule — the part of the craft designed to eventually carry six people to suborbital space — then gently landed back on Earth after deploying its parachutes.

The New Shepard’s engine kicked back on about 5,000 feet above the ground, and then the rocket made a soft touchdown back on Earth. The vehicle was moving at just 4.4 mph when it made its landing, Blue Origin said.

“This flight validates our vehicle architecture and design,” Bezos wrote.

Eventually, Blue Origin plans to offer suborbital flights to space aboard New Shepard. Blue Origin also plans to build and launch an orbital rocket that would fly people and cargo to space from Florida.

Bezos claims that reusable rockets could greatly lower the cost of access to space. Instead of effectively throwing away rocket components after one use, Bezos hopes to use those rocket parts again and again over the course of at least a few missions.

“We want to see millions of people living and working in space, and that’s going to take a long time. It’s a worthwhile goal,” – said Bezos.