Da Vinci’s Bridge in Ice will be build in Finland 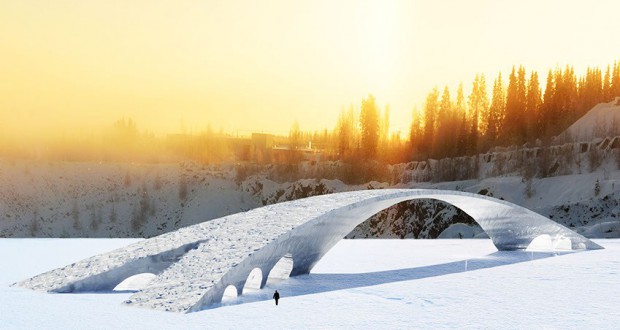 About 100 students and volunteers from different countries will travel to the Finnish Juuka this winter to build an ice bridge, Joinfo.ua reports with reference to Technologist. The hundred-meter long bridge will get a free span of 50 meters and is made of ice and paper.

An international team of students led by Eindhoven University of Techology Structuralice project plan to build an ice bridge reinforced with paper fiber. The 100 meter long bridge, based on a design by Leonardo da Vinci, will have a span of 50 meters – the longest open span ever built from ice. A total of around 100 students and volunteers will travel to Juuka in Finland this winter to build the huge bridge. Construction of the foundations will start at the end of December in Finland, and bridge should be completed in mid-February 2016. The universities of Leuven, Aalto (Helsinki), Ghent, Bath and Edinburgh also intend to contribute and build their own ice structures, which together with the bridge will provide a big ice spectacle.

“It will be a long, narrow bridge providing a new constructional challenge”, is how project leader and TU Eindhoven lecturer Arno Pronk explains the project. “There have been bridges of 15 meters, but we’ve never seen one as long as this.” The bridge is based on a design by Leonardo da Vinci for a bridge over the Bosphorus – although that was never actually built. That’s why the full name of the project is the Da Vinci’s Bridge in Ice. The ice bridge uses the same constructional principle as Da Vinci’s bridge: the whole structure is only subject to compression loads. When the bridge is finished it will carry pedestrians. The structure can easily handle that, says Pronk.

Pronk and the two students who are leading the project together, Roel Koekkoek and Thijs van de Nieuwenhof, want to show that pykrete is an excellent building material for temporary structures. “Pykrete offers an easy way to build slim, safe and low-cost temporary structures – for example for temporary roads in arctic regions, at events or for ice hotels.”

The bridge is built by spraying thin layers of water and snow onto a large inflated balloon, and then letting it freeze. Layers snow and water with ten percent paper fibers, are sprayed alternately. The water-fiber mix is then immediately absorbed by the snow, and it all freezes together. The addition of fibers makes the material three times as strong as normal ice, and also a lot tougher. The builders will work in shifts, 24 hours a day in the freezing cold. That’s because the equipment would freeze if the work was stopped for too long.

The ice bridge will be built in a 70 meter deep old quarry. The students will allow water to freeze on the walls of the quarry, creating a kind of ‘ice arena’. Together with ice projects from other European universities, the site will be transformed into a winter exhibition of ice architecture. Just as in past years, the ice project is expected to attract thousands of visitors.