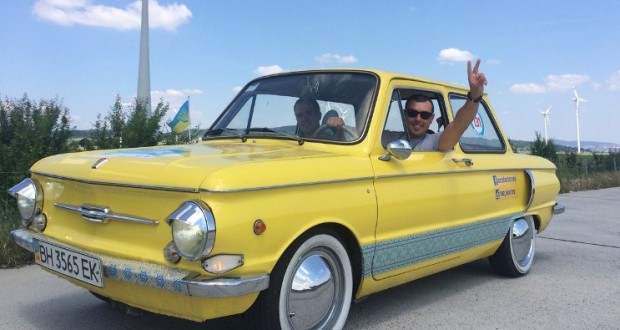 A group of engineers and enthusiasts from Odesa, Ukraine, headed by Sergiy Velchev, converted the old ZAZ-966 (an old iconic model made in Zaporizhya car factory) into a modern electric vehicle, Joinfo.ua reports citing UAinfo.

In June 2015, Odesa residents drove almost 3000 kilometers at Kyiv – Monte Carlo international electric car marathon. At one of the sites they even outran the famous Tesla.

Sergiy Velchev said that in order to take part in the marathon they had to convert an old Zaporozhets into the electric car. Thus, they had to change every detail inside the car.

“We have replaced the engine for new Ukraine-made electric engine, Japan-made battery and US-made controller. By the way, in Ukraine there are significant reserves of lithium, and we could easily produce our own batteries”, – says the engineer.

The converted electric vehicle can run up to 500 km on a single charge. The maximum speed of the car is 130 km / h. There are already 34 electric charging stations in Ukraine, so the participants could charge. By the way, one charging of ZAZ-Electro takes from 3 to 12 hours – depending on the network capacity.

The specificity of this ecological marathon was that the winner was determined not by the speed. A winner had to arrive to the finish line in a certain time. So, if a car doesn’t break down on the road it wins.

Serhiy said also that there were some minor malfunctions on the road, which were quickly eliminated. According to Velchev, at first everyone was rather skeptical about their vehicle. But seeing how the frisky Zaporozhets ran for 500 km (and even outran Tesla), they changed their minds.

“Of course, our Zaporozhets became a road star – everybody liked it, asked for photos, and some foreign restaurants were trying to buy it”, – said Sergiy.
See also this “Volkswagen minivan turned electric” from the Verge: