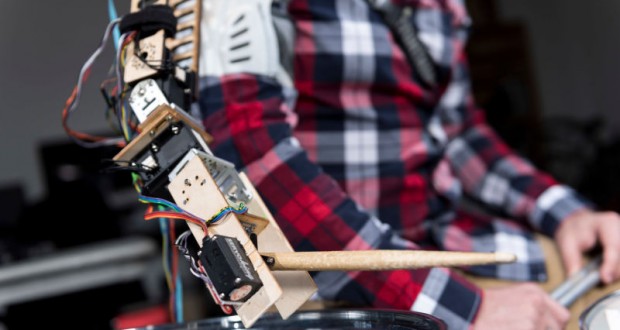 This wearable robotic arm is not just mirroring the movements of the drummer. It’s a “smart arm” that’s actually responding to the music, and performing in a way that compliments what the human player is doing, Gizmodo reports.

The two-foot long arm monitors the music in the room, so it can improvise based on the beat and rhythm. If the drummer is playing slowly, for example, the arm will mirror the tempo.

The arm is also equipped with built-in accelerometers, so it’s aware of its location relative to the drum kit at all times. When the drummer moves to play the high hat cymbal, it goes to the ride cymbal, and when the drummer switches to the snare, the robotic arm plays the tom. Its on-board motors ensure that the stick is always parallel to the playing surface, allowing solid contact with the drum or cymbal. Human motion capture technology helps the arm move naturally with intuitive gestures.

The drum’s inventor, Gil Weinberg, is no stranger to robotic drumming. Two years ago, he designed an equally “smart” prosthetic for aspiring drummer Jason Barnes, who lost his right arm in an accident. Inspired by this work, Weinberg decided to create the wearable third arm so that anyone could benefit from the technology.

Weinberg said that music is the perfect medium to experiment with the concept of a third arm—one that allows humans do to things they normally wouldn’t be able to do. The idea of “shared control,” he said, plays into the whole idea of cyborgs, or augmented humans.

“If you have a robotic device that is part of your body, it’s a completely different feeling from working alongside a regular robot,” noted Weinberg. “The machine learns how your body moves and can augment and complement your activity. It becomes a part of you,” adding that “Machines are not separate from humans, they are becoming a part of humans.”

Looking ahead, the team would like to start dabbling with EEG headbands to see if they can link the arm’s movements to brain activity. But to make it work, they’re going to have to map a drummer’s brain patterns as they correspond to physical movements and changing musical dynamics. No easy task.

Weinberg is also hoping to see his device used outside of music.