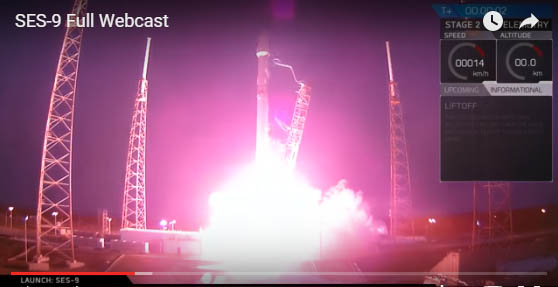 This was SpaceX’s fourth attempt to land the Falcon 9 post-launch on an autonomous drone ship floating in the ocean. CEO Elon Musk said the rocket “landed hard” on the drone ship, Joinfo.ua reports with reference to the Verge. The mission requirements made a successful landing unlikely.

All of the previous sea landings failed too, though the third attempt came very close. The company had low hopes of a successful landing from the start of this mission, since the rocket had to send a heavy satellite into a high orbit. That requires a lot of fuel for the launch itself, so there wasn’t much fuel left for the rocket’s return to Earth and powered landing.

So far, SpaceX has only been able to land its Falcon 9 on solid ground, which it did for the first time in December. Ground landings are much easier than ones at sea; the rocket touches down on a large expanse of immobile land, as opposed to a tiny ship floating on the ocean. Still, SpaceX will keep trying to perfect its ocean landings, since ground landings aren’t even possible for some missions. Landing at sea requires less fuel, so the technique is a suitable option for missions that require the rocket to travel at especially high speeds.

Despite the failed landing, today’s SpaceX launch still accomplished its primary goal of sending a telecommunications satellite into space for the company’s client, SES. The SES-9 satellite was dropped off at high altitude and will use its own propulsion to travel to its intended orbit. Eventually, SES-9 will sit at 22,000 miles above the equator, providing communications service to Northeast Asia, South Asia, and Indonesia, according to SES.