Shares
Research prototype can survive hundreds of feet below the water 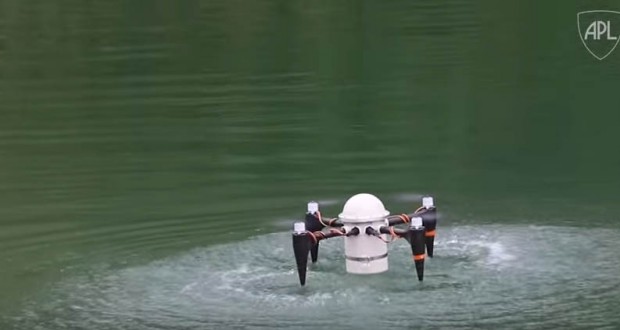 Researchers from John Hopkins University have developed a prototype drone that’s just as happy in the water as it is in the air, the Verge reports.

The submersible quadcopter is designed to launch from an underwater station or vehicle (like a submarine, for example), bobbing to the surface from depths of hundreds of feet. It was built using 3D printing to be lightweight, low-cost, and resistant to water pressure, and its core components are sealed in a waterproof chamber. The drone’s external motors, meanwhile, have been given anti-corrosive coatings to protect them from saltwater, with the drone capable of surviving for up to two months underwater in tests.

“Engineers at [Johns Hopkins Applied Physics Laboratory] have long worked on both Navy submarine systems and autonomous UAVs,” said the project’s manager, Jason Stipes, in a press release. “In response to evolving sponsor challenges, we were inspired to develop a vehicle that could operate both underwater and in the air.” The researchers behind the drone aren’t saying what it could be used for beyond a “wide array of potential missions,” but the vehicle seems like it would be perfect for conducting reconnaissance. The prototype drone has been christened CRACUNS —Corrosion Resistant Aerial Covert Unmanned Nautical System — a not so subtle nod to that underwater terror of legend, the Kraken.