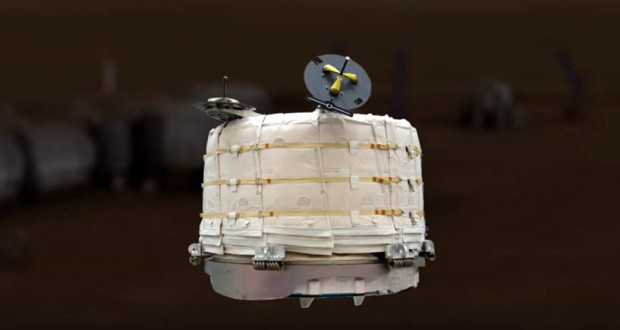 NASA is preparing to test on the International Space Station (ISS) a new inflatable habitat called the Bigelow Expandable Activity Module (BEAM) that could eventually make its way to Mars with the astronauts of the future, the Geek reports.

The BEAM will be delivered to ISS in a few weeks aboard the SpaceX Dragon capsule, its first mission to ISS after last year’s failed launch. After docking, mission control will use the station’s robotic arm to remove the module from the Dragon’s cargo hold and attach it to a port on the Tranquility node.

Since this is an inflatable module, a big part of the test will be adding air to BEAM and monitoring how it expands to its full size. This is a desirable design because an inflatable habitat can offer the same space as something more solid, but with much less mass on the launch vehicle. When compressed, the BEAM measures about 5.7 x 7.75 feet. When it’s fully expanded, it will become 12 x 10.5 feet in size. NASA says the BEAM should provide about 565 cubic feet of additional living space on ISS.

After the module has been fully pressurized to the station, astronauts will enter and deploy sensors that will be used to evaluate BEAM. NASA is looking for data on how well something like this can hold up to the stresses of space during its two-year test and how well it protects inhabitants from radiation.

If the BEAM proves itself, future Mars habitats could use similar designs. Minimizing mass will be of vital importance on such long-term missions. Inflatable modules could also reduce the cost of deploying space stations in orbit of Earth or other objects.