Shares
After ten years of waiting, Tesla has revealed the Model 3, the vehicle that CEO Elon Musk hopes will take the electric car to the masses 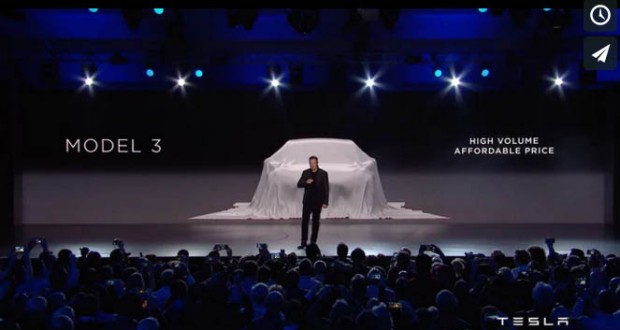 At the unveiling of the Model 3 this evening at the company’s design studio in Hawthorne, California, Tesla CEO Elon Musk said the car will deliver at least 215 miles of range beginning at just $35,000 — that’s a bold claim, and an important one for Tesla to meet, the Verge reports.

Deliveries are planned to begin by the end of 2017, and, according to Musk, “you will not be able to buy a better car for $35,000, even with no options.” He also promised that it will be one of the safest cars in the world.

The base car will do 0-60 mph in less than 6 seconds, with versions that go “much faster.” Range will be at least 215 miles, but Tesla hopes to exceed those numbers in the final car. All Model 3 cars will include support for Tesla’s high-speed Supercharging network, because “it’s about going where you want to go,” according to Musk. By the end of 2017, when the Model 3 launches, Tesla says it will have a total of 7,200 Superchargers, double the number available today.