Home / Tech / Stunning space video from back of rocket

Stunning space video from back of rocket

Shares
A high definition video, recorded from the perspective of the GoPro strapped to the side of the rocket, shows the 20-foot tall SL-10 rocket's take off and flight into near space 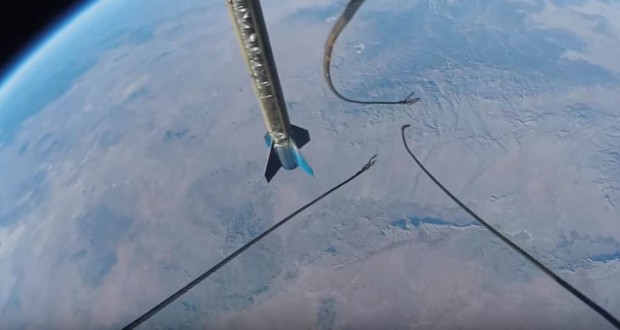 The video was recorded back in November 2015, by the GoPro camera strapped to the side of the rocket, during the UP Aerospace’s test flight aimed to check the aerodynamics and stability of payload upon reentry for future missions, Joinfo.ua reports with reference to the Mashable.

The crystal clear, high definition video shows the 20-foot tall SL-10 rocket’s take off and flight into near space, traveling at 3,800 miles per hour and reaching an altitude of about 75 miles.

According to UP Aerospace Inc., on November 6th, 2015 the company launched the 20-foot (6 meter) tall SL-10 rocket into near-space. The mission was to deploy the Maraia Capsule testing the aerodynamics and stability of the payload on re-entry to the atmosphere. The rocket reached an altitude of 396,000ft (120,700 meters) and speeds up to Mach 5.5 (3800mph or 6115km/h) at engine burnout.