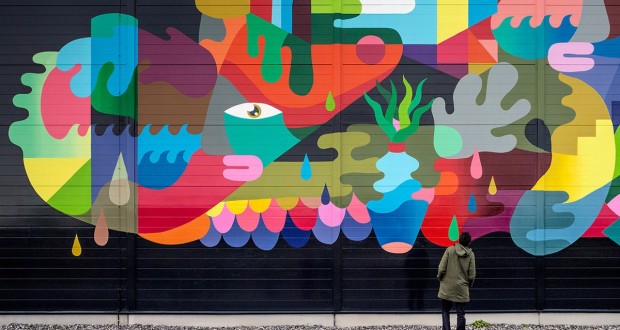 “It may look like a giant canvas, but this is a very special place that plays a special role in the operation of the Internet, which ultimately plays a role in the lives of a lot of people and mine, too,” Oli-B, an artist who reimagined the cloud on the exterior of a data center in St. Ghislain, Belgium, said in a video describing the project, Mashable reports.

His mural’s dark background brings life to a bright, abstract cloud that incorporates people, animals and objects he saw at the center and in the surrounding city. The sheep that roam the grounds, a hot air balloon representing an annual festival and several eyes come to life in a rainbow of colors.

“Seeing them from a satellite perspective kind of brings out how strange and specifically human they are,” Odell said in a video provided by Google. “The satellite imagery I used to make this mural at some point passed through a data center like this one.”