Shares
The prototype of “Synchronous” – the first Ukrainian-made electric car – now is being prepared for the presentation during an annual pan-European electric rally – Electric Marathon 2016 Lviv – Monte Carlo. It will visit 23 cities and towns in 10 countries across Europe 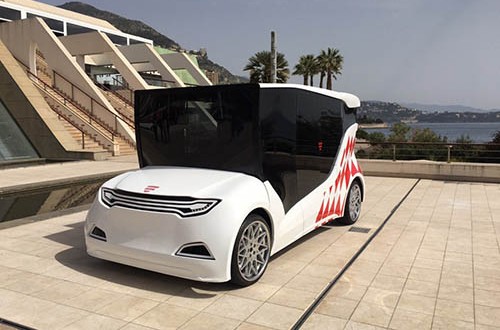 The “Synchronous” operational prototype is a new vision of the exclusive passenger transport. It should become the ideal tourist shuttle for hotel transfers, or taxi for excursion areas. It was first presented in April at the 11th annual conference on ecological vehicles and renewable energy EVER 2016 in Monaco, the Electric Marathon reports.

“The idea of an exclusive electric car struck us when we, while on a visit to Monaco, did not manage to call a taxi”, tells Andriy Bilyy, CEO of the prototype developing company Electric Marathon International. “Then we decided to create a vehicle that would especially fit those locations, such as Monte Carlo. Our company organises annual Electric Marathon that finishes in Monte Carlo. We thought that that was not enough, we wanted to do something of a greater importance, something that will be remembered. And we did that. In 2015 we presented a concept in Monaco, and it attracted public attention. A year later we reached the point of a workable prototype. Everyone was impressed in Monaco, as they do not often work with our country and did not think that Ukrainians can be so productive”. The Ukrainian electric car has all chances to become popular in Monaco, thinks Juri Tamm, Honorary Consul of Monaco in Estonia.

“The government of Monaco and HSH Prince of Monaco Albert II personally contribute greatly to the environmental protection and the development of “green” technologies”, he says, “Therefore the new model of an electric car is very relevant for this country. Similarly to the Principality of Monaco, “Synchronous” has a conservative “appearance” and contemporary, technologically developed “heart””.

“The idea of making “Synchronous” look like a sport car was thrown away immediately, you cannot surprise the inhabitants of Monaco by that”, recollects Vladyslav Karpets, director of the design company SkyRye, that participated in the development of the electric car’s design. “Therefore we have chosen am ambitious concept of retro-futurism: a car that is modern inside and looks like an old carriage outside.

“Until “Synchronous” remains a prototype, it is difficult to speak about the exact technical characteristics”, says Sergiy Velchev, head of EcoFactor company that assisted in the development of the engineering part of the project. “The car’s body is made of composite materials. We are especially proud of asynchronous engine produced in Ukraine”.

E-Line company developed the charging device exclusively for Synchronous. The director of E-Line Vladyslav Rodin spoke about that.

According to Andriy Bilyy, the main advantage of the Ukrainian electric car is the improved comfort level: detached driver’s cabin, large comfortable cabin for up to six passengers with comfortable sofas.

Currently the question of serial production of the Ukrainian electric car is discussed. Meanwhile the prototype is being prepared for the presentation in the course of annual pan-European electric rally – Electric Marathon 2016 Lviv – Monte Carlo. After the start in Lviv on May, 22, “Synchronous” will be presented in 10 European countries and 23 cities and towns.