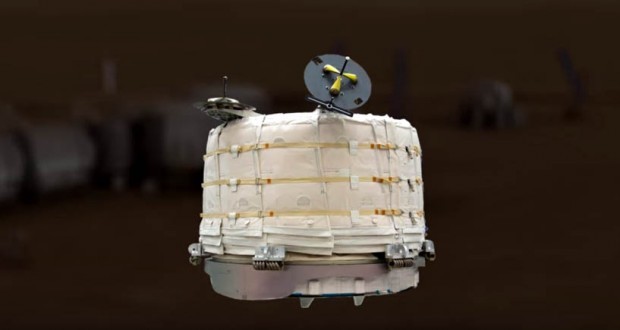 Astronauts aboard the ISS entered the station’s first inflatable habitat today. At 4:47AM ET this morning, NASA astronaut Jeff Williams and Russian cosmonaut Oleg Skripochka opened the hatch to the expanded habitat and ventured inside to collect air samples and data from the various sensors embedded in the module, the Verge reports.

That data will ultimately tell NASA and Bigelow Aerospace — the habitat’s manufacturer — how well the module, called BEAM, is holding up in the space environment. But according to Williams, the air in the habitat looked “pristine,” albeit a bit cold.

The BEAM, or the Bigelow Expandable Activity Module, is meant to test out how inflatable habitat technologies hold up in space. It was launched to the ISS on a SpaceX Falcon 9 rocket on April 8th, and then attached to the station’s Tranquility module a week later. The module was designed to stay compact during launch and then expand in space, providing more interior room for astronauts to move around. Fully inflated, the BEAM provides 565 cubic feet (16 cubic meters) of internal space, as opposed to just 127 cubic feet (3.6 cubic meters) when it’s deflated.

Getting the BEAM to its full capacity took a little longer than NASA initially expected. On May 26th, the space agency tried inflating the BEAM for the first time, but the attempt failed. NASA said the habitat didn’t expand because of high friction forces between the habitat’s fabrics. However, when NASA tried again a few days later, the BEAM expanded as planned.

Now that the BEAM is at its full size, the space station astronauts will enter the module from time to time to check on its various sensors. Crew members will continue working in the BEAM on Tuesday and Wednesday. Afterward, the hatch to the habitat will be closed. During its scheduled two-year stay aboard the ISS, the astronauts are only meant to venture inside the module about three to four times a year.