Swiss students built the fastest-accelerating electric car in the world

Shares
30 students of ETH Zurich and the Lucerne University of Applied Sciences and Arts have teamed up and built the fastest-accelerating electric car in the world. 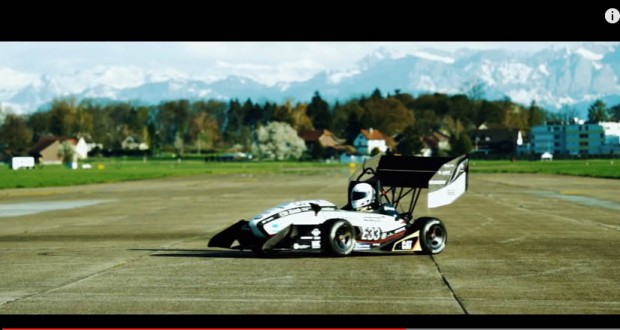 Academic Motorsports Club Zurich (AMZ) published a video today that shows “grimsel,” its electric race car, accelerating from 0–60 miles per hour in just 1.513 seconds on a runway at Dübendorf Air Base in Switzerland, the Verge reports.

It’s more than half a second faster than the world’s fastest production cars (including Tesla and its “Ludicrous Speed” mode), and two-tenths of a second faster the previous record. It’s even faster than the Zombie 222 electric Mustang. The car is made mostly of carbon fiber, uses four-wheel drive, and has an onboard computer that applies traction control to each individual wheel.

The team is made up from students from two universities: ETH Zurich and the Lucerne University of Applied Sciences and Arts. The car was made for the Formula Student competition, where the AMZ club has been ranked number one in the world for three years. Teams with the best cars in these competitions often also take aim at this world record since the cars are so good at accelerating, but AMZ had a bit of an axe to grind, too: the club broke the record in 2014 but lost it last year to a team from the University of Stuttgart.

Formula Student — also known as Formula SAE — is a global competition that was started in 1981. Teams of students build new cars every year and compete in a variety of ways on and off the track. They have to prove out and defend their design and engineering choices, and even pitch these cars to fake investors (in order to learn about marketability) — and that’s all before they race the cars on the track.

Part of the reason that Formula SAE isn’t too well-known is that the cars never race wheel-to-wheel. There are two main reasons for this. First, the teams typically build one prototype car per year, so the demolition risk is just too high. And second, the students are also the drivers, which means most of them don’t have formal racing experience.