Shares
Ukrainian Antonov design bureau, as part of the State Enterprise Ukroboronprom, will participate in the Farnborough Air Show 2016 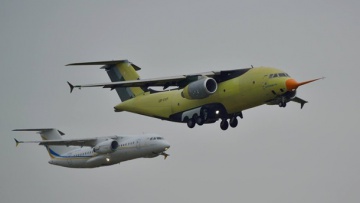 The best-known products of Ukrainian aerospace industry are probably the massive Antonov An-124 Ruslan and An-225 Mriya cargo lifters, which are the two largest aircraft in the world. Both types were revealed back in the waning days of the Soviet Union in the late 1980s, as Reuben F. Johnson wrote for the Aviation International News.

For many years, Ukraine’s industry has been providing engines, radars, avionics and missiles to Russian enterprises for final installation in finished products deployed all over Russia.

But since military conflict broke out between Ukraine and Russian-backed fighters in 2014, exports of military-use items from Ukraine to Russia have been embargoed. Ukraine now has to find a way forward in the world market on its own.

But, when Ukraine became an independent nation almost 25 years ago these aircraft were both almost completely out of production and the future of the nation’s substantial aerospace sector was uncertain.

“Some Russian planners could see the end coming—the fall of the Soviet empire,” said a former high-ranking Ukrainian military intelligence official speaking to AIN on condition of anonymity. “Already in the late 1980s there were valuable military assets being moved out of Ukraine and into Russia so that they would be on Russian soil when the end came for the USSR. But there was no way to relocate the massive Ukrainian defense industrial network into Russia—there were just too many assets that could not be moved.”

Other than the Antonov design bureau and its associated production plants, Ukraine had on its territory a number of valuable aerospace industrial assets. Several of these are showcasing their products and capabilities at this year’s Farnborough International Airshow.

After independence Ukraine initially was providing the same components for military products sold to Russia’s export customers that it had always supplied to Russia’s military as well. Some of the sales made to foreign clients in the early 1990s (at a time when Moscow was desperate for export orders) could not have been brought to contract completion without Ukrainian industry.

The production of the first batch of Su-27SK fighters sold to Beijing in 1991 required deliveries of products from forty-four separate Ukrainian enterprises. Ukraine also provided training for maintenance personnel, support systems, missiles and other major components. In all, up to 60 percent of all Ukraine defense exports were being sold to Russia for these and other purposes.

But, a decade later, the number of Ukrainian firms still participating in the delivery of components for follow-on orders to China totaled only 14. Only two plants in Ukraine were still producing parts for the final assembly of the Su-30-MKI that has become the backbone of the Indian Air Force.

This pattern of Moscow “weaning” its industry off of its dependence on Ukraine continued in other nations as well that were customers for Russian weapon systems, like arranging things so that as many parts as possible for Malaysia were provided by Russian enterprises.

But with the total ban on any products from Ukraine being shipped to Russia, Ukraine’s enterprises have had to come up with plans to stay in the market, but without supporting Moscow’s military ambitions in the process.

One example would be the helicopter engines that are produced at Motor Sich. Ukraine now ships the engines required directly to the customers that are users of Russian helicopters. Motor Sich and others have even developed upgrade programs for the M-17 and other helicopters that are independent of Russia.

“In the past we would not have gone off on our own and have risked incurring the wrath of the [Russian] OEM,” said one Ukrainian enterprise representative. “But in the current environment no one is going to ask the Russians for ‘permission’ to do anything.”

Another aeroengine success story is the AI-222-25 engine that is sold to the PLAAF. The engine is used to power the Hongdu L-15 jet trainer that is being exported from China. The engine is also being developed in several higher-thrust versions for additional applications.

Both U.S. and other NATO-nation analysts see several chances for Ukraine to be competitive in the world market now, while at the same time it builds its customer base up and realigns its industry away from Soviet-style organizational patterns.

One is that there is still a substantial market for Ukraine to be able to support the armed forces of NATO states and other nations still operating Russian-designed equipment. Upgrades of the MiG-29, Mi-17 and Mi-24 and others could be a lucrative business that Kyiv can continue to pursue.

Another promising project is the An-178 twin-jet transport aircraft. There has been some investment in the program by China so far. More than one analyst has described it as an aeroplane that could compete someday with the Lockheed Martin C-130 models and other similar aircraft.

The missile design bureau of Luch in Kyiv has—along with others—also developed derivatives of the R-27 missile that could turn this design into an effective surface-to-air missile in the same manner than Raytheon’sAIM-7 and AIM-120 AAMs have been adapted for air defense roles.

“There are numerous SA-6, SA-8 and even SA-3 batteries still in use around the world,” said a Ukrainian defense enterprise director. “The countries that have them now still want to keep operating them. We can upgrade them here in Ukraine, which relieves them of the need to ask for Moscow’s very expensive engineering solutions.”

But many of the same countries also need new missiles to go with the upgraded air defense launchers and radars, he explained. “Adding one of the Raytheon missiles to these SAM units or some other AAM that has been converted for an air defense application, like the Diehl IRIS-T, is just too expensive for most of the nations using these older Soviet-era air defense systems.”

What Ukraine lacks, however, is a comprehensive plan for restructuring its defense industrial structure, explained a former U.S. defense official. “The country needs to simultaneously rebuild its industry to be compatible with NATO, develop products that support its troops in the field fighting against pro-Russian separatist units in Donbas, and produce innovations that can be sold on the world market.”

Carrying out all of these objectives at once is a “tall order,” he said. It is also not likely to happen until Ukraine addresses some of the other problems associated with doing business inside of its borders so that foreign partners will be more inclined to build bridges with Ukraine’s industry.

“The industry has a lot of potential,” said the former U.S. defense official. “But in order to realize its full extent the country is going to need foreign partners that have both the patience and the interest in long-term investment in this region.”

The Ukrainian Pavilion at the Farnborough Air Show 2016 is located in Hall 2.