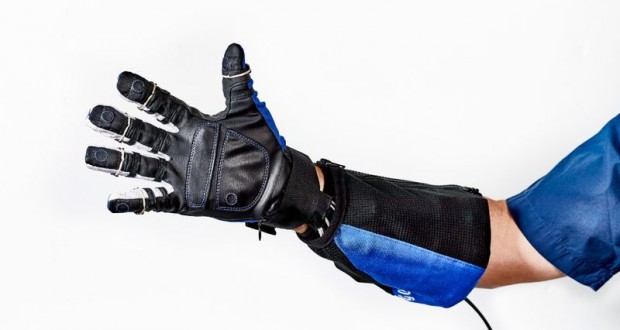 A motor-assisted glove designed to let astronauts carry out mechanical repairs without suffering muscle fatigue is making its way to Earth. The technology behind the RoboGlove, which was originally developed by NASA and General Motors in 2012, has been licensed to Bioservo Technologies, a Swedish medical technology firm, the Verge reports.

The glove uses actuators and artificial tendons to mimic the muscles of the human hand, and is a example of “soft exoskeleton” technology — lightweight devices that augment the wearer’s strength and endurance. Bioservo Technologies will combine the RoboGlove with its own grip-assisting SEM (Soft Extra Muscle) technology. The end product could be useful in a number of markets, from medical rehabilitation to manufacturing. GM says it intends to try out the product in its US plants, where it’ll give extra grip strength to factory workers.

The force-multiplying RoboGlove was developed as part of a nine-year collaboration between GM and NASA, which included work on Robonaut 2 — an experimental humanoid robot intended to assist astronauts on the International Space Station. Research into Robonaut’s hands, which are design to be as dextrous and flexible as humans’, fed into the creation of the RoboGlove.

Pressure sensors in the glove detect when the user is holding an object, triggering synthetic tendons that strengthen the users’ grip. “An astronaut working in a pressurized suit outside the space station or an assembly operator in a factory might need to use 15 to 20 pounds of force to hold a tool during an operation,” said NASA in 2012. “But with the robotic glove they might need to apply only five to 10 pounds of force.” A battery pack worn on the user’s belt provides the glove with power.